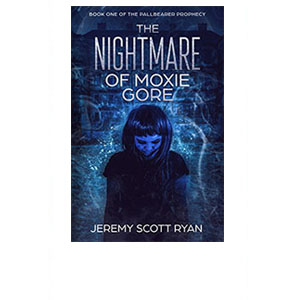 The Nightmare of Moxie Gore

As always, I’ll start my review with the point: my verdict on The Nightmare of Moxie Gore, Jeremy Ryan’s debut novel.

I. Freaking. LOVE. This. Book.

Decisive enough for you? I’ll state for the record that I’m not a huge fan of five star ratings, because something in my brain wants to say 100% is perfection, and nobody is perfect. Unfortunately, 4.99 stars sounds idiotic, so I’ll set aside my reservations and go with 5.

The Nightmare of Moxie Gore is charming book, equal parts snarky, surreal, and creepy. It’s short, listed as 209 pages on Amazon, but efficiently packs a respectably complete story into a small space. It’s the first book in what Mr. Ryan has titled The Pallbearer Prophecy, and if there was a pre-order option for book 2 on Amazon, I’d be clicking it already.

Moxie Gore is an unusual sixteen-year-old girl living in contemporary Massachusetts. Somewhat in the vein of Harry Potter, she is an outcast, both in the fact that she isn’t loved by family at home, and that even among the small paranormal organization known as The Order of Aldred, she is different from everyone else. Like Harry, she is a chronic outsider, with her nose pressed to the glass of life more often than not.

Also similar to Harry Potter, the world Moxie lives in is at times whimsical and fantastical. With a two-dimensional death train, handbags that are far deeper on the inside than the outside, self-animated maps that only work when viewed in one’s peripheral vision, cattle prods for herding ghosts, the JK Rowling influence is hard to miss. And easy to love.

But don’t let that fool you into thinking this is a Potter-knockoff. The Nightmare of Moxie Gore is edgier and darker, while still remaining firmly entrenched within the confines of Young Adult. Ryan’s characters are largely deceptive, and the reader is constantly second guessing where their loyalties lie.

The novel moves at a brisk pace and adheres to a solid structural model, even to the point where the classic midpoint contextual change happens at almost exactly the 50% mark. (no spoilers, but a single fact is presented at this point that totally changes Moxie’s view of everything.)

The book is well crafted with the perfect amount of introspection to provide Moxie with depth and plausibility, but not enough to cause the reader to get bored.

The supporting cast is littered with vibrant, interesting characters. Unlike typical debut authors, Ryan doesn’t neglect the minor characters. None fell flat. Again, this feels reminiscent of Rowling’s work, where even a bit-part bus driver named Stan Shunpike manages to leap off the page and steal a scene, Ryan leaves the reader wishing that every character had a bigger role.

If you put a gun to my head and demanded to hear a few negatives, I might grudgingly point at some scenes in the second half of Act 2, where Moxie enters a decidedly weird and surrealistic dream world. There were a few points where I felt like I’d lost my anchor, and the story ‘floated’ a bit. The dream scenes flashed by, each wildly different from its predecessor, and the result was somewhat dizzying. In this one area, I felt that Ryan perhaps went overboard with too many rapid-fire scenes, each perhaps too description-rich, and each so fundamentally different from the world to that point, that I stopped and blinked, saying to myself “Wait. What?”

But as I said at the start, no novel is perfect. This minor issue should in no way dissuade readers from plunking down a couple of dollars to buy a ticket to a fantastic world.

The Nightmare of Moxie Gore earns my five star rating.