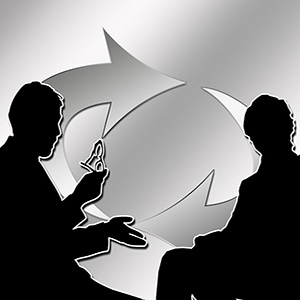 Dialogue is one of the most interesting phenomena I’ve encountered in the world of writing. One would think that authors would execute this more effectively than narrative description, since verbal communication is something we all engage in every day of our lives. Ironically, however, writers very often manage to get this wrong. Perhaps it’s the result of some sort of mental shift, because the written word is very different from the spoken word. We’re taught a way of writing in business and English class, and it looks natural on the page as narrative, but dialogue is a different beast. Yes, we’re writing, but we’re not describing. There’s a profound difference.

Let me give an example.

A friend asked me to critique a chapter for her last week, and she had a bad guy threatening someone with lines like “This is unacceptable,” he growled. “I’ll hurt you if I must!”

Bleh. Say that line aloud. Can you imagine a thuggish villain phrasing it that way? I suggested a line like “I’m done screwing around. You want to do this the hard way?” He shrugged, vertebrae cracking. “It’s your funeral, bitch.”

It’s not really hard to transform dialogue into a more natural form simply by picturing the scene in your head and saying the words aloud in your best Willem Dafoe impersonation. It’s a bit like method acting. Get in character. You’ll see the difference immediately.

But method acting isn’t the be-all-end-all of dialogue. It’s nothing more than a starting point. There are lots of other things to think about.

For instance, consider slang and idiomatic speech. You’re doubtless aware that particular slang can help identify someone’s place of origin. We all know words like ‘ya’all” (southern), “youse” (New York), and “you’uns” (western Pennsylvania). But there are many more. For example, the use of the preposition ‘with’ to end a sentence (“you coming with?”) The “us” in this example is implied, and that unusually means you grew up around Chicago or Detroit. Or perhaps your character is southern, and uses double modals like “I might could do that” or “Could you might give him a ride to the store?”

In the following quiz you’ll see that linguists can often identify a very narrow radius around where you grew up simply by examining idiomatic patterns and pronunciations.

There are an uncountable number of idioms. These are especially useful when depicting characters with thick accents. Instead of burying your dialogue under bizarre spellings and apostrophes, focus on the idioms instead. A Scottish person would probably say “You’re off your trolley” instead of “you’re crazy.” A Texan might say “he’s all hat and no cattle” instead of “he likes to brag.” My character Melvin Hayes from Gnosis is a Jewish immigrant. Instead of the word “bastard”, he uses “momzer.”

Do a little research. By combining your character’s ethnicity, age, gender, level of education, and even occupation (lots of occupations come with their own slang), you can create compelling, authentic dialogue. Before I begin a writing project, I typically scour a handful of different sources, looking for slang, idioms, and peculiar phrasings for each of my characters. I stash these phrases (and their definitions) in a file, and when it’s time to write dialogue, I keep an eye out for opportunistic places to insert the ones that sound good.

Another thing that lots of writers get wrong is a bit more subtle. Imagine you have a lot of characters who all grew up in the same neighborhood, and are the same age and gender. If these are our only criteria for producing dialogue, then all of your characters will sound the same. But that’s subtly confusing. You don’t want to flood the story with dialogue tags, naming each speaker, but if everyone sounds the same, then it’s easy for a reader to get lost, unable to identify who is talking. In an ideal world, you could extract all of the dialogue to its own file, with no tags or narrative, and still be able to identify each speaker solely on the basis of how they speak.

That’s where you have to pay close attention. Give each character their own unique catch phrases and labelling systems. For instance, in Gnosis, my protagonist is named Samantha Black. When the character Alexander is talking about her, he refers to her as “Sam.” Melvin Hayes refers to her as “Sammie.” Dr. Galloway consistently calls her “Miss Black.” Hayden Reece derisively refers to her simply as “girl.” Each character is consistent in the way that they label the world, and this allows them to be both consistent and unique.

Things like this are subtle, but when you establish a consistent pattern, you are training your readers to identify characters by the way they phrase things, much like you can identify people by the sound of their voice. Not only does this make each character feel fundamentally different, it makes it easier to read and follow the story. Other examples might include some characters who refuse to swear, while others curse prolifically. Maybe some are extremely verbose, using fifty words to answer a yes or no question, while others are unnaturally terse. Sometimes characters can have a catch phrase, like “It’s clobberin’ time!” (although you don’t want to overdo this). Some characters are more crude and aggressive, “Screw that.”, while others are reserved and indecisive “I’m not sure that’s a good idea.” Some use a lot of passive voice “I was rushing to the store” while others are more colorful “I had to jet.”

Make each of your characters distinct. There are plenty of variables above. Combine them together to form speech patterns that are unique to each character. And don’t skimp on the minor characters. Just because they only have two lines in the entire novel doesn’t mean you should make them boring. Everyone is different. Reflect this in the way that they speak. It’s a powerful technique.

A few other odds and ends to give some thought to:

Like most parts of writing, dialogue requires care and research. It’s always a temptation to assume that speaking is so natural that you don’t need to research or put much thought into the way things are phrased. As if, as long as the subject matter the characters are talking about is accurate, then the way they say it is meaningless. Don’t fall into this trap. Often, the things that seem so easy and natural are the things that we don’t pay enough attention to, and we screw them up.

It’s an easy trap to fall into.