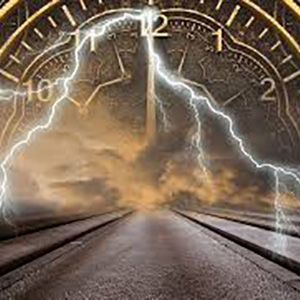 Your own personal time travel method

About a decade ago when I first started writing fiction, my early work suffered from a staggering number of problems. If I represented each mistake as a single domino, I bet I could have filled a gymnasium with them, like one of those mesmerizing world record domino-toppling videos. Correcting my errors involved several years of herculean effort, but I’m happy to report that these days, I might only be able to fill my living room with dominoes.

In this post, I’d like to discuss the domino that I didn’t even realize existed until two or three years ago. I think in many ways, it turned out to be the master domino. The root cause of many of my flaws. The one that ruled them all.

I had been following a standard methodology that simply didn’t fit me. I was writing linearly.

Linear writing is such a standard that a lot of people don’t even recognize the term. They aren’t aware that it has an opposite: NON linear writing. They don’t know that it could be an answer, at least for some of them.

To understand it, let’s start by defining linear writing. It’s very simple. Linear writing is when you write each of the chapters in your first draft in the same order the reader will read them. It seems like a no-brainer, doesn’t it? I mean, after all, how can you possibly write chapter 47 before you write 46? Don’t you need to know what happened in chapter 46 first, so that you know where to pick up the action?

Non linear writing uses exactly that approach. It is a system where you write chapters in an order that is essentially random. Whatever scene you feel inspired to write about when you get up in the morning, you write.

Nah. Pour yourself a scotch and stop flipping the bird to me through your computer screen. You only need one thing to restore sanity to that madness. You need an outline.

Think about it. If you have a thumbnail sketch of each chapter in advance, then you already know the big events that are going to happen leading into the chapter. You already have an idea where the chapter has to end in order to flow into the following chapter. You already know the characters who will appear, what their motivations and emotions are, and what aspects of character arc you have to fulfil. You have everything you need to write any chapter at any time.

An outline is simply a matter of sketching out each scene with a few paragraphs of pertinent information.

There are lots of great books on the subject of outline creation. You can check out KM Weiland’s Outlining Your Novel: Map Your Way to Success for one good example. Books like this will give you lots of good ideas of the kinds of information a good outline requires. When done properly, an outline allows an author to focus on the writing craft, rather than getting bogged down in the strategic elements of plot and character development while they write.

Ironically, even the process of outlining can be an example of non linear writing. When I started my outline for Gnosis, I followed James Scott Bell’s advice in Write Your Novel From The Middle. I started with the pivotal mid-point scene first, then outlined the inciting incident, then the climax, worked my way through the major structural scenes, and finally filled in all the remaining gaps. All in outline form.

Then I started writing. In the past, I could write chapter 1, maybe 2, 3, and 4. But eventually, I’d hit a wall. For whatever reason, a chapter would stare at me and laugh. Nothing would come to mind. I’d struggle for days. Sometimes weeks. I’d delete attempt after attempt, each one causing me far too much stress.

Now, I look back on those days and laugh. Armed with my mighty outline, I wake up and ask myself “What do you feel like writing today, Rick? A chase scene? An epiphany scene? Dialogue?” I peruse my list of unwritten chapters, and let them speak to me. Inevitably, one will jump out and shriek in glee “Pick me! Pick me!”

In the back of my mind, I still know which chapters I dread. But with plenty of fun things to write first, the hard ones have time to bake in my brain. Sometimes a stray thought for a dread chapter will occur to me as I’m writing a fun one, and I jot it down in my notes while I forge ahead with the easier chapters.  Over time, I get enough notes that the hard chapter seems much less intimidating. When I finally get around to it, it’s almost never a dread chapter any more.

And this was the essential ingredient I’d been missing all along. The linear approach killed all of my motivation. It caused a civil war in my state of mind.

When you dread writing something, it’s almost a guarantee that it will take ten times as long, and in the end it will still suck. Then you lose momentum. Things go downhill fast. You resolve yourself to dealing with the dread chapter in revisions. You put it off, or sometimes you just chuck the entire manuscript onto the slush pile and start something new. I know. I’ve done that.

But using a non linear writing approach, I dialed back the difficulty level of the dread chapters, AND I kept up my all important forward momentum. I stopped tossing perfectly good work onto the back burner. Writing became fun again. And that made a world of difference.

But before you write the whole process off as just a self-induced motivational mind hack, note that there are some other tangible benefits to non-linear writing.

At this stage, I should acknowledge a personal preference. I don’t feel totally bound by my outline. I treat it like a general road map, not the Bible. If, during the course of writing a chapter, I feel like a character’s personality dictates a zig when the outline called for a zag, I let the character zig. After I finish the chapter, I return to my outline, update it, and make the necessary changes to any subsequent (or previous) chapters that might be impacted. It’s not a lot of work. That’s the point of an outline. It’s low investment. You can write with no style and terrible grammar, and it doesn’t matter. Just change the necessary facts and move on.

That’s usually the big complaint about using outlines, by the way. Writers say they feel constrained, bound, by the outline. But if you do, you’re rather missing the point. It’s not there to shackle you. It’s there to liberate you. It’s MUCH easier to modify a collection of thoughts and ideas than to go back and rewrite whole chapters when you have to change a character or plot moment. THAT is shackling yourself. When you’ve invested a lot of time into writing an entire chapter, even in draft form, you’re giving it momentum. You’re increasing the resistance to change it. Outlines free you up from that.

Look, non linear writing isn’t for everyone. It requires a bit of a paradigm shift in your thinking, especially when you first try it. And it seems pretty scary, like you’re tightrope walking between skyscrapers without a safety harness.

But from my perspective, once I got the hang of it, the methodology offered so many benefits that I could never go back. It’s like travelling forward in time to read the ending of your novel, and then coming back to the present, armed with the exact roadmap of how to write it. Non-linear writing is my own personal DeLorean, complete with flux capacitor.

I’m never trading it in.