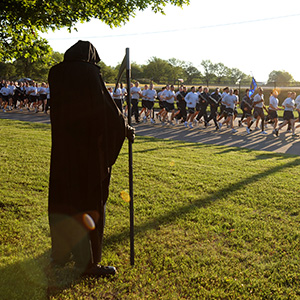 Some things in life you just know instinctively – no one has to tell you. For instance, I knew for a fact that I was dead.

Most people would freak if they woke up and found a gaping hole in their chest. But the gore didn’t cause me as much anxiety as the strange, nagging feeling something was missing. I couldn’t put my finger on it, but the feeling wouldn’t go away. Whatever I’d forgotten, it felt more important than the hole in my chest.

That was my first clue.

Then I glanced up at the carnage around me. Half a dozen kids, second graders by the look of them, lay sprawled on the playground. A faint August breeze pushed away the lingering scent of burnt gunpowder. Rusty red splotches stained the playground sand.

Police milled around, scribbling on notepads, snapping photos, talking to people. There didn’t seem to be any EMTs in sight. No one paid the slightest attention to me. I felt invisible.

And that was my second clue.

By themselves, my first two observations should have been enough. But the final bit of evidence was the most persuasive of all – I sat in the middle of a playground full of dead children, but felt no sense of horror. No shock. The scene had no more effect on me than a stroll down the driveway to fetch the mail. That’s what really convinced me. Nobody can look at a playground full of tiny corpses and not react.

Not unless they’re dead too.

But it turns out death doesn’t insulate you from feelings. Not completely. My skin started to crawl even before the thing showed up.

No one nearby, living or dead, gave any indication they saw it as it swept across the playground. There was no mistaking it, the thing was coming for me.

Robed in darkness from head to foot, it left a trail of withered grass in its wake. The world seemed to bend around it, like looking through a fish-eye lens. Its bright red eyes pinned me in place. I was a bug on a specimen sheet, helpless as it stalked me.

It stopped, looming, and extended a bony arm. “That was pathetic.”

I knew what it was now, and the last thing I wanted to do was touch it. But the nature of death is relentless. Unavoidable. No one escapes the Reaper. I reached out and took its hand, and in that moment, memories flooded into me.

I saw my life played out at high speed, like a video on fast forward. It went from birth to childhood, to adulthood and death, in seconds. A placid, uneventful life. Almost boring, if we’re being honest.

But something about it was wrong. In that view of my life, I perished old and alone in a nursing home. Not like today, an early and violent death.

I looked from the playground to my own discarded body lying at my feet, to the blackness inside the Reaper’s hood.

It nodded and led me away. “That’s the nature of second chances. They’re disorienting. You’ve lived two different versions of the same life, and you remember both with equal clarity. The mind has difficulty reconciling the contradictions.”

We walked in silence, the creature respecting my need to sort things out. A second chance, it had said. And I remembered not one death, but two. Just this afternoon I’d taken a bullet to the heart. I was twenty three years old. And yet, I also remembered a retirement party at age sixty seven. And the nursing home at seventy five. And my death at…

A clanging bell shook me from my thoughts.

Somehow, we’d left the playground far behind. We faced an imposing, black, steam train. The bell rang again, beckoning us to board and take our seats. And with that, the train gave an ear splitting hiss and lurched into motion.

I stared into the blackness of the Reaper’s hood as he sat across from me, but if there was a face in there, I couldn’t see it. Nothing that resembled humanity. “I think I’m starting to remember. After I died the first time, as an old man, you gave me a second chance.”

“That’s right. You died once, content and peaceful, but also useless. You lived the life of a drone. You contributed nothing to the world. Made no impact on anyone.”

A tiny flicker of irritation sprang to life in me, but I managed to swallow my pride. Anger was a poor choice in the circumstances. “And that’s why we’re here? The purpose of life is to make a difference?”

“Yes. That’s what we’re looking for – the kind of souls that make the world a better place. It’s why God put you on this Earth. It’s not a matter of intellectual or physical gifts. It’s about will. Drive. The desire to do something meaningful. Something impactful. That’s what makes a useful soul. But you contributed nothing. You didn’t even try. All you ever did was take up space and exist. Your life was a failure.”

I don’t know whether it’s possible to ascribe human emotions to the Reaper, but it seemed there was a note of disdain in its voice. Or maybe it was simply justifying my fate, as it was becoming clear where the train was headed. I glanced out the window at the countryside that rolled past.

Outside, it looked far less hospitable than where we’d come from. The summer greens had surrendered to autumn browns. Trees had shed their leaves. No birds fluttered through the sky. The world was rapidly dying, and it became more desolate as the miles raced by. I didn’t want to think about it.

“But you let me try again. You let me choose something about my life that I could change.”

“Yes. If you’d succeeded, maybe you could have proven yourself worthy. Ascended. But like most, you threw away your second chance. You chose some event in your life that you thought was pivotal. In your case, the day you saw a gunman approaching a schoolyard. In your first life, you fled when he passed by. You lived, and six children died.”

Ruthlessly, the Reaper bludgeoned me with my inadequacies. The stark unfairness of his logic was a slap in the face. “But this time I did something. I got involved.”

With no more effort than shooing away a fly, the Reaper batted aside my feeble defense. “This time you got shot. And six children died anyway.” There was no longer a question of whether his voice contained derisiveness. “Dying isn’t making a contribution. The only impact you made was with the ground when you ended your life fifty years too soon.”

Irritation turned to outright anger. I wanted to point out the hypocrisy. Who was the Reaper to judge me? In his own way, the Reaper was nothing more than a deified bureaucrat. What did he contribute, besides consigning others to oblivion for their flaws?

That’s what I wanted to say. Instead, I practically blubbered. “But… what else could I have done? That was the only important moment in my life.”

The creature looked at me, heaved a sigh, and then turned to face the window. Outside, no traces of life remained. The earth was baked dry, huge cracks scarring the landscape. Not even grass or weeds grew there now.

He stared for a long time before finally responding. “You failed because you never understood life in the first place. Changing a single moment of it doesn’t alter who you are. If you wanted to make an impact, you had to change something much more basic.”

“You could have chosen a different path. Maybe started a charity, or taught people to read. You could have stood for something. Or stood against something. You could have taken some risks. At any time of your life, you could have changed course. Who knows? Anything might have given you the tools to affect the world in a positive way. But if you wanted to stop a madman with a gun, you should have become a cop. Or a soldier, or an athlete. Or maybe at least joined a gym, for God’s sake.”

And there it was. The point of humanity: to be the kind of person who leaves the world a better place than they found it. To matter.

I’d lived two lives, and I don’t recall ever having any aspirations other than my own safety and comfort. I’d blinded myself to the hopes and dreams of everyone else because I had no dreams of my own. I insulated myself from humanity. And in so doing, I left my own humanity behind. All my life, I risked nothing and gained nothing. Mine was a wasted life. Two wasted lives.

“Oh.” A coldness overtook me. A strange calm. “I guess I get it now. The life I led never equipped me to make an impact.”

“Exactly. And now it’s too late.” The Reaper stood and stepped up to the door. It swung wide and the creature pointed. “This is your stop.”

A searing blast of air struck me. The world outside was a churning sea of reds and yellows. Clouds of acrid smoke billowed and roiled. An angry hiss seemed to call my name.

I stepped up beside him and fixed my eyes on the inferno. “Well, there’s no denying that I didn’t change anything the second time around. But you’re wrong about one thing.”

With a last, deep calming breath, I steeled myself. “It’s not too late for me to do something that matters. Not quite.”

I pushed the Reaper from the train.