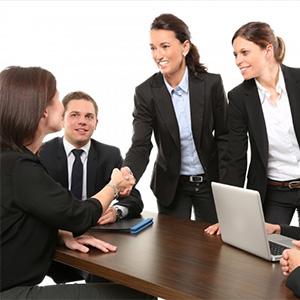 You’re Not the Boss of Me (Yet)

How Stereotypes Can Become Opportunities

The bolt action on your sniper rifle clicks softly.

You poke your head just high enough to peek over the ledge, and watch the combat unfolding below you. Blue team, your guys, are pinned down and out-numbered. They’d have been annihilated minutes ago, except for PythonInMyPants, your team’s heavy gunner. He’s an Olympic level dick, but he’s also a sort of virtuoso of destruction, singlehandedly keeping your team in the game. You’re the only girl, so he gives you constant crap, sending you out on recon runs, which is his terribly clever euphemism for bait or cannon fodder. Big surprise.

You line up the shot and click the mouse.

PythonInMyPant’s brain explodes in a cloud of red gore. The enemy captures your flag less than thirty seconds later. You smile anyway. ‘Victory’ is a relative thing. It depends which battle you’re fighting.

This is the world of videogames. Endless, mindless slaughterfests, built for teenage boys, by older (and arguably even less mature) boys.

As far as you’re concerned, First Person Shooters are okay, but you can take them or leave them. Unfortunately, if you want to play the games with the best graphics, your options are limited. It’s mostly gorefests, with wizards farting fireballs and aliens firing lasers from their eyes, all being slaughtered by chainmail-bikini-wearing heroines with impossible boob-to-waist ratios.

Unfortunately, most of the suits at the helm of the companies that make these games are just grown-up versions of the gun-crazed, boob-obsessed kids who design them. Intellectually, they know, sort of, that there’s a huge market out there for women gamers, but they steadfastly point at self-fulfilling sales figures and say, “We develop what the market wants.”

Things are changing. Slowly. The problem is that the few designers who seem aware that females exist are outnumbered. There’s a push to get more women in development and design, but you’ve got to be a computer programmer to get into the industry, right? Maybe that’s your thing. Maybe not.

Yeah, I know, but humor me. Don’t stop reading yet.

Take a look at the trends. Over the past few years, a bunch of researchers have been crunching numbers, and they’re reaching some crazy-cool conclusions.

Women make better managers and leaders than men.  No shit, it’s true. I’ve provided a handful of statistics as an addendum at the end of this post, but the upshot is that companies with higher percentages of female leadership:

And it’s not a bunch of gratuitous smoke-and-mirrors where they change the scale to make women look better. It shocks a lot of people, but the data is undeniable.

I could speculate about the reasons why. Lots of people already have, and if you think about it, most of the reasons they give make sense. There’s a certain logic to the realization that culturally, women are forced to develop the necessary skills of social navigation from an early age.

Ironically, generations worth of repressive social norms have resulted a skill-set that prepares women extremely well for positions of high-level leadership. You’ve got to love how often karma has a kind of cosmic sense of humor like that.

Regardless, that’s your foot in the door.

You don’t need to be a a coder or an artist. It’s fine if you are. Go for it. That’s one way in. But if you’re more of a people person; if you’re organized and have some empathy and common sense; if you’re decisive and able to communicate; if you’re the type who’s willing to kneecap the jerkoff who gives you crap on the battlefield; you’d probably make a kickass leader. And trust me, the videogame industry needs leaders.

But, you ask, what about those suits at the helm of the companies making videogames? You don’t need to worry about them. They may have sophomoric personal histories, but age has instilled in them a serious love of money, and that can only work in your favor. They can see the same trends I can see. They know the untapped market is out there. They know that having women inside the machine will help them tap that market, and as an added bonus, those women, on average, will do a better job at leading the effort than the men will. Mark Zuckerberg of Facebook came to that conclusion a few years ago, and now everybody knows who Sheryl Sandberg is.

The world is about to change. A perfect storm is brewing, where reality is starting to dawn on business minds. You’re young. You love videogames. You’re perfectly positioned at the edge of the storm, standing in the right place and time, ready to spread your wings and ride the wind.

What will you do?

ADDENDUM – As promised for the number crunchers out there, here are the high points in the data: