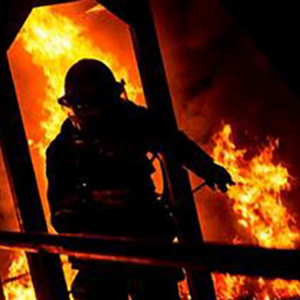 It sounded like a freight train speeding through my skull. Maybe it was the blood roaring in my ears, or maybe the sound of the fire. Either way, that white noise drowned out everything else.

Chief Gillespie screamed into the radio, but it was like watching a silent movie. Exhaustion bled the color from his face, and the streaks of sweaty soot gave him the appearance of a ghoulish commando. The whites of his eyes stood out most of all. Wild. Panicked. Whatever he was shouting about must have been bad.

Leave it to a hot tempered immigrant Scotsman to get into an argument from the heart of an inferno.

But we didn’t have time for squabbling. From the hallway a couple of minutes ago, we’d heard a cry for help. It sounded like a young boy, but by the time we broke the door down the sound had stopped. Now while Gillespie threw his weight around, that child might be dying.

I drifted closer to hear what he was blathering about.

“What do ye mean the ladder truck’s stuck in traffic? What’s the bloody ETA?” Gillespie clutched the radio in a white knuckled grip, spit flying as he shrieked. That Scottish brogue became less comprehensible the more he lost control.

Screw him. Somebody had to do something. I scanned the apartment, looking for likely hiding spots. The flames were pretty high on the couch, and they lit the room with a wobbly red glow. Sparks drifted through the air, clinging to the smoldering curtains. Thick smoke floated across the ceiling like a storm cloud. It was hard to see, but there was no doubt. The boy wasn’t there.

Flames blocked access to the balcony, but that didn’t matter. Fire had already destroyed it. If anything had been out there, it was five stories down on the pavement by now.

“No, damn it!” Gillespie shouted into the radio. “The hallway’s burnin’ now too. We ain’t gettin’ out the front door. Set up airbags under all the windows. We may have to jump.” Then he jabbed a finger towards me. “Junior, get yer thumb outta yer arse. Stop staring out the window and find that boy!”

I bit back the urge to tell Gillespie where to jam his attitude. The jackass insisted on calling me Junior, like I was some kind of rookie. But the academy days were ancient history. He wasn’t my instructor anymore. And besides, I was searching for the fucking brat, unlike him.

I stormed off towards the back bedroom.

The apartment was getting hotter, and sweat drenched my face. I made sure to escape Gillespie’s sight before stopping. A trick I’d learned not long after joining the department was to hold the face-shield at arm’s length. If you tilted it at just the right angle, you could see your reflection.

I breathed deep and wiped sweat from my eyes. My thumb snagged on the little scar by my left eye. The one Gillespie gave me during that drill at the academy. The one flaw in an otherwise handsome face. Prick called it an accident. Accident my ass.

Without warning, Gillespie appeared in the reflection. Rage blazed in his eyes. I never saw the punch. My world flashed red and I crumpled to the floor.

“Are ye off yer trolley?” Gillespie snarled and rubbed his knuckles. “What the fack do ye think yer …” The growl trailed away as his glare locked on the foot of the bookcase beside my head. I turned to look. A thin streamer of smoke slid under it.

I looked back at Gillespie. A smile crept across his lips. “A panic room,” he whispered. “The bookcase is a fake door!”

Abruptly, the smile turned to a hacking cough. The smoke was getting out of control.

One handed, Gillespie flipped his breathing mask into place. With the other hand, his fire ax lashed out, shearing through books and splintering shelves. If I hadn’t rolled away, the crazy fucker would’ve split me in half.

“Keep yer eye on that fire, Junior,” he yowled through the mask. “See if ye can slow it down. Buy me some time.”

That was the last straw. First he treated me like a rookie. Then assaulted me. And finally, after I practically pointed out the panic room door like a fucking bird dog, this asshole shoved me out of the way. Like he’s the hero.

No doubt when we got out of there, he’d have the brat in his arms, flash bulbs popping, crowds cheering. And I’d be trotting at his heels like a goddamned mascot.

Fists bunched, I edged around behind him.

I had to squint to see him through all the smoke. Thick, black smoke. Too thick.

Thick, rolling black smoke meant it was full of unburnt carbon. Dangerous, flammable carbon. I recalled my training and glanced at the ceiling. Snakes of fire darted in and out of the boiling black clouds. My gear began to smoke. So did Gillespie’s. The temperature was spiking. I knew what that meant.

In a few seconds, everything in the room would reach ignition temperature. Everything would burst into flames at once. We had to get to another room. Use a door as a temporary barrier. Buy a little time.

And then epiphany struck. The bookcase-door may be solid steel, but the walls weren’t. The panic room looked home-made. We could cut through the back bedroom wall. I was certain.

I edged away, staring at Gillespie’s back. He was oblivious to the impending flashover. Oblivious to the fact that he couldn’t chop through a steel door.

I stepped out of the room, closed the door, and clicked the dead bolt into place.

I smiled. Those air bags had to be set up by now. In thirty seconds, I’d be through that wall. I’d save the boy.

And nobody would call me Junior ever again.