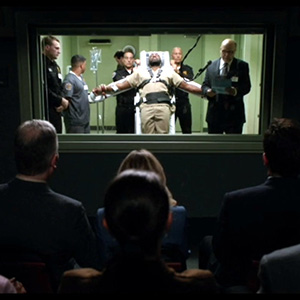 More than anything he’d ever wanted, James Brooks wanted to wake up. He wanted to open his eyes to Sunday morning, to Kylie and Anna, bouncing on the bed and making those ear-splitting, little girl shrieks. He wanted the smell of frying bacon to come wafting up from the kitchen, and he wanted to feel the warm spot next to him where Alice always slept.

It was useless. That dream had faded fourteen years ago. When James did open his eyes, he’d be staring at the putty gray walls of a tiny chamber. Four men would be staring down at him.

Tears crept from the corners of his eyes, rolling into his ears. The gurney lurched as he struggled against the restraints. Damn! Why couldn’t he hold himself together? Crying wouldn’t change anything.

Not even at his own execution.

A sharp pain stabbed his left arm. The untrained medical technician cursed softly and rubbed the crook of James’ elbow with a thumb.

James kept his eyes squeezed tight, but the tears were relentless. They shamed him. They put his weakness on display, and devoured his last remaining scraps of dignity.

Oh, God. That didn’t sound like a man. It was the uncertain squeak of a six-year-old who’d just heard a thump in the bedroom closet. James forced his eyes open and strained to face the mirror opposite the gurney, but the effort was futile. A leather strap immobilized his head. All he could manage was a limp stare.

“I don’t know if either of you is behind that glass. But … but I want you to know … no matter what they say, Daddy isn’t a monster.”

A knuckle cracked. “Shut up, boy. That’s the Dupree family behind that wall. An’ they’re here to watch you die.”

Frank Turner. Inmates and guards alike knew him better as Daisy, though nobody was stupid enough to say it to his face. It had something to do with his habit of volunteering for execution chamber duty and getting off on seeing cons pushing up daisies.

Another stab, this time in the right arm, followed by more cursing.

“Christ, Frank,” growled the second guard. James thought his name might be Bobby something. “Don’t you got an off switch? Poor bastard’s got maybe five minutes left. You could cut him some slack.”

Five minutes. James began to panic. How did it get to this point? How did everything spin so far out of control?

Another stab jolted the back of his left hand.

“His kind doesn’t get any sympathy from me.”

In rapid succession, images flashed before James’ eyes. Alice in her wedding dress. The first day on the job at Harvey and Lois Dupree’s Christian bookstore. The day Anna was born. A pony in the back yard for Kylie’s fifth birthday party.  Every cop car in Corpus Christie surrounding James and Alice’s house on Birmingham Street. The girls shrieking as cops dragged their daddy away in handcuffs.

The room started to swirl, but James wasn’t sure he cared any more.

“Knock it off, you two.” Warden Kramer’s solemn voice barely managed to cut through the jumble of James’ thoughts.

Breathing became ragged. Sweat, cold and clammy, broke out on his face and hands. His heartbeat hammered in his chest, as if it could pound its way free of the body that was about to die.

“Bingo!” cried the med tech, a little too loud.

For a moment, silence blanketed the room.

The Warden disturbed the momentary tranquility. “Lower the microphone.”

A faint humming accompanied a boom microphone as it descended from the ceiling. The warden leaned down to look James in the eye. “Does the prisoner have any last words?”

He shook his head. They wouldn’t wait much longer.

“Kylie? Anna?” His voice quivered. He stopped, swallowed, and took another breath.

“Babies … I guess I can’t call you that now. It’s just that I haven’t seen you in forever, and that’s how I remember you both. I don’t blame your mom for keeping you away, though. This is an awful place.”

He swallowed once more.

“A-anyway. I’ve got no right to ask you to believe me. Nobody does, so I won’t ask you to either. But you’re old enough now that I can, well —  I’ll just ask you to — remember the good times. Before — before they took me away. Remember me like I remember you. Can — can you do that for me girls? Please?”

He closed his eyes and looked away from the microphone. Silence fell over the room once more.

James couldn’t meet the warden’s eye. He just blinked back new tears and gave as much of a nod as the head strap would allow.

The Warden nodded back. Grim faced, he dropped his gaze to the floor and removed his glasses – the signal for the men hidden behind the walls to push the button.

James closed his eyes one last time and pictured his girls as they were so many years ago — Kylie’s fifth birthday party. The last time he saw them. Laughing and taking turns riding the pony in circles around a small mountain of brightly wrapped gifts. There was cake and ice cream, and Alice couldn’t stop smiling. There were neighbors and kids everywhere. There was a future that seemed as bright as a Sunday afternoon in July.

And then there was nothing.