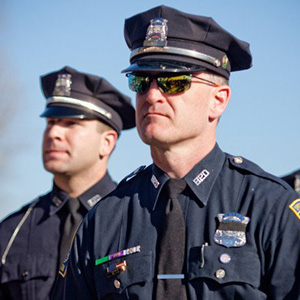 Abe set a lemonade down next to his battered typewriter and rubbed a patch of grime from the window. He wiped away a big enough clean spot to clearly see the woman picking her way past the puddles in the parking lot, not that seeing her clearly did a whole lot of good. Cooter, Missouri was one of those tiny hole-in-the-wall towns where everybody looked the same. Abe hadn’t lived there long enough to master the skill of differentiating one woman from another. They all had that hard, used-up look.

“Sheriff,” Abe called towards the office door behind him. “Woman headed our way, ’bout forty years old, give or take. Moving slow. Want me to get this one?”

“Keep it holstered, Rookie,” the sheriff grumbled. “You still haven’t unlearned all that crap the academy pounded into your skull.”

That was sheriff Jim Keller – a technophobe who rejected every policing innovation since the days of Wyatt Earp. Keller was a rustic who believed his community was the exception, where normal rules don’t apply. Anybody who didn’t buy into the bullshit couldn’t be trusted.

Abe ground his teeth and leaned back in his chair, struggling to keep a neutral expression. He made a point of not looking up as the woman entered the station house. Sheriff Keller shrugged a uniform jacket on as he stepped out of his office. He tugged his hat on with one hand and waved her towards a chair with the other.

“Morning, Molly,” he said, gravely. “What brings you in today?”

White knuckles clutched her purse with both hands as she sat down. Her mouth was a thin, white line set against a pale, sweating face. With a deep breath, she seemed to harden herself. Chin thrust out, brows furrowed, her eyes narrowed to lock with the sheriff’s. “I been keepin’ a good watch on them Abernathy’s. Seems to me that Jasper’s up to no good.”

Without a word, Keller snatched up a blank report sheet and fed it into a ’62 Underwood manual typewriter. He had to raise his voice to be heard over the clatter. “That the brick ranch-style place, across from you and three doors down?”

“All right.” Jim kept hammering at the typewriter. “You know I’ll need more’n that if you want me to investigate. What all did you see, exactly?”

“Every night this week I seen the light go on in Sarah’s bedroom. It ain’t happenin’ at normal hours. Like two, three in the morning sometimes. Light stays on for about an hour, then goes off. Happens a few times a week.”

The typewriter went silent when she stopped talking. For a few moments, she seemed to be somewhere else, trembling a little and staring at a point on the ceiling where some plaster had flaked off.

Keller cleared his throat. “Well now, I haven’t seen Jasper nor his family in quite a spell, but I’m thinkin’ Sarah’s gotta be nineteen now.”

Molly looked at the sheriff, wide eyed, as if for a moment she didn’t recognize him. But with a rough shake of the head, the trembling ceased. “So?” Nostrils flared, and her cheeks blossomed pink as she wagged a finger. “Ain’t no age limit on incest, Jim Keller. You know that as well as I do.”

“That’s God’s own truth, Molly,” Keller replied. He turned his attention back to the ’62 Underwood and rattled away for another minute or two. Molly stared vacantly at the ceiling some more.

A few minutes more, and the typing stopped. Molly looked at the sheriff’s face, his features arranged in a stern but reassuring expression.

“Ok,” he said. “Abe and me will head on over this evenin’ when Jasper gets home from work. We’ll have a word with him and see what’s what.” The sheriff rested a gentle hand on the back of Molly’s and gave it a pat. “You rest easy. Anything sinful is happening over there, we’ll figure it out.”

Molly’s face softened. Eyes cast down, her grip on the purse loosened. She mumbled “All right then,” and scurried from the room.

Keller took a deep breath, waited for a count of ten after she’d left, and then eyed Abe. “Lunch?” he asked.

“What? We ain’t gonna do nothing? Sheriff, this is serious.”

“Boy, you an’ me both know that story’s fulla holes. ‘Sides, Jasper Abernathy’s a preacher, and Sarah’s off to college. He turned her bedroom into a den last fall. Ain’t nothing going on there.”

Everything Abe had learned at the academy said the situation called for some kind of response. He stood, glaring at the sheriff. “Either we investigate a potential crime, or we arrest Molly for filing a false report.”

“Or we let a woman get over grief and guilt in her own way.”

“We … what?” Abe nearly blurted out a lecture on police ethics before realization dawned. “Oh. You mean … she … her own … “

Keller nodded. “Three years it went on – near as anybody could tell – right under her nose. It was her fourteen-year-old boy, Davey, finally phoned it in. Only Davey was shot by the time I got there. Walt did him in the back of the head. Phone was still in the boy’s hand.”

The typewriter whirred as Keller yanked the report out. He opened a filing cabinet and thumbed through it, withdrawing a folder about an inch thick. Into this, he solemnly placed Molly’s report. Closing his eyes for a moment, he drew a long, steady breath. Then he looked up. “The gutless prick shot himself right ‘fore I got there. No jail for him. No justice. I found Molly in a bedroom closet, just rocking and mumbling about what she shoulda done. Ever since, she’s been filing regular complaints, mostly against her neighbors.”

“We do what good cops do, Rookie. We protect and serve our community. And in this case that means we listen, write a report, and then do nothing.”