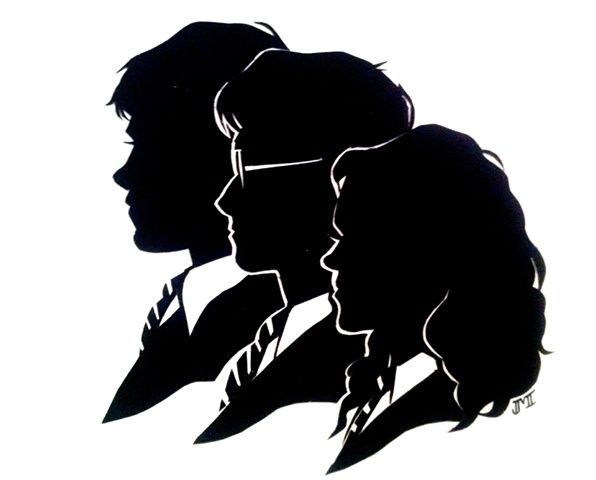 My approach to writing has always been to start at the most strategic level and work my way down to the details. For me, it’s easier to focus on the words if I’ve already solidified the main concepts that direct those words. That’s why things like audience expectations, story structure, and outlines are so well suited for me. They free up my writing brain to focus more on craft. With that in mind, I’d like to bring a pretty cool concept to your attention: The Soul Triptych.

This is a somewhat obscure technique that I stumbled across a few years, and I was so enamored with it that I used it during the writing of Gnosis. Put simply, a soul triptych is a model that facilitates the intelligent crafting of a trio of main characters in a way that is surprisingly organic and also appeals to some fundamental human traits. 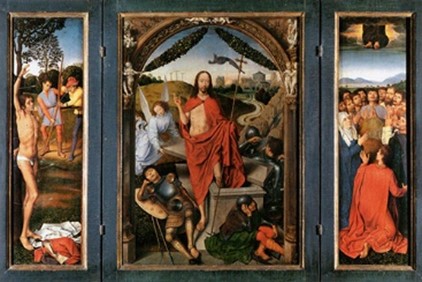 For some of you, a triptych might be a familiar concept in the world of art. It refers to one of those three-in-one fold-out panel paintings. An example of one is Hans Memling’s Triptych of the Resurrection, shown here. Depending on the artist, the triptych often depicts three different facets of the same subject matter.

In a similar way, we can think of a trio of main characters as three facets of a complete human personality, with each character representing one of the three basic drives.

The three most commonly used facets are: Body, Mind, and Spirit. You can define each of these in a variety of ways, but for the most part, your definitions will be similar to:

The Body – This character is usually, but not always, physically strong. They are driven by passions and desires. They are earthlike, grounded in physicality. They are typically very practical and concerned with reality, rather than abstractions. They don’t often dive too deeply into mysteries, and tend to react spontaneously. Their passions run strong, and they are often deeply loyal and unconditional.

The Mind – This is the brain of the trio. They are the one who devises the plans most often. Detail oriented and intellectual, they strive for logic. They are driven by clear, rational thinking, and the inevitability that this creates. They can be abstract, often skeptical, and sometimes cold and aloof.

The Spirit – The Spirit is driven by compassion when making decisions. They are all about feeling. They can be inflexible. Having once made up their minds, they can be driven by desire to see things through to the end. They are the spiritual leader of the trio (which doesn’t necessarily translate to the actual leader).

Now, before you go all crazy and suggest that this creates fractional, two-dimensional characters, relax. That’s not the intent. The purpose is to allow each character to focus on a different aspect, not to be constrained by it. Characters should have depth and the ability to deviate from their role from time to time. The soul triptych role simply points at their dominant traits.

Looked at in this light, the soul triptych is a story representation of the three powers of humanity. And because you have three characters each representing a different one, then together they make a complete unit. This provides an interconnectedness. An intrinsic need for each other. The triptych is often a very tight, indissoluble team.

Whether intentionally or not, we see this model in successful fiction, television, and movies. A LOT. Here are a few examples:

Take a moment and consider any of the above trios. Let’s consider Ron, Hermione, and Harry from the Harry Potter series. Go back and review the definitions of Body, Mind, and Soul above. It’s abundantly clear which role each character serves. These are not shallow, two-dimensional characters. They each have lots of things going on and they each maintain a level of individuality and uniqueness. They are a very tight, loyal group, and they need each other. In any given book in the series, each one is vital to some element of the overall quest. Together, they form a complete unit, with all of the necessary traits to overcome adversity.

And knowing what their intended role is makes it easier as a writer to devise challenges that are suited to one character over the others, thus rendering all of them useful and necessary to the story.

As readers, when we are presented with a triptych, we identify with the experience of the characters being portrayed. The triptych represents universal human characteristics that we are all familiar with. We need wit, determination, and strength to exist day-to-day. By magnifying these qualities and embodying them in individuals, writers then provide these qualities with the necessary exaggeration to make them heroic.

It’s possible that there is an even deeper connection between humans and the triptych. Plato spoke of the concept millennia ago. We might even see it reflected in Christianity, in the form of the Holy Spirit, God, and Jesus. One could provide a chicken-and-the-egg argument about the ultimate source of the concept, but regardless of one’s belief’s, it has been around for a very long time. Long enough to have become ingrained in our basic expectations of humanity.

And that’s why it works so well.

There are variants on the concept as well. We’ve all heard the phrase body and soul as a reference to a complete human. This pair can also be used as a soul diptych, with similar results. (Oh, and notice in the above list that any one of the three can be the actual leader of the group. In Harry Potter, the Soul leads. In Star Trek, the body leads. In Hunger Games, the mind leads. There is no requirement that any particular facet must be dominant. And that’s good, because it allows the writer to retain maximum flexibility during the character creation process.)

The Body and Soul definitions from above can still apply, but the dynamic between them changes. The triptych often creates a tight, harmonious trio, where the three forces have an almost democratic means of resolving internal conflict. With a diptych, conflict is more common, since there is no third party to turn to in the event of disputes.

Diptych duos are often tense. Although allies in some sense, they are constantly at odds, working against each other while pursuing some overarching goal. Their relationship can be more accurately described as a rivalry. They can be protagonist/antagonist, but when they are on the same side, there is a lot of friction. It is a classic collision between reason and emotion. Harnessed correctly, it can make a powerful duo, but success is often balanced on a razor’s edge.

With that in mind, let’s look at some well-known Soul Diptych examples.

Again, consider how this kind of duo interacts. The body is grounded, simple & clear, often physical and strong. They are experience seekers. The Mind is more skeptical and analytical. Often smarter and more cynical. The duo is sometimes a forced alliance, and sometimes antagonist/protagonist, but either way, the relationship is built for conflict. With no third party to mediate, these two are oil and water. They still usually need each other, though, so like it or not, they have to find ways to tolerate each other, even when their personal goals are at odds. The diptych has the makings of great tension.

Alternatively, you could just as easily define your own necessary facets of the human condition and create roles for your characters to fill. The point is that it is a tool, and it opens up avenues of thought that you might not otherwise have considered. And because the model involves, or should involve, fundamental aspects of the human condition, then it can produce consistent characters that will resonate with your readers in a natural way.

As I said in the beginning, it isn’t necessary to use models like these. They’re a tool that may help you think and create. They can channel your thinking. Maybe they’ll get you off to a good start and then you jettison them, or maybe you’ll follow them rigidly to the end. Either way, they make your writing fun to think about, and that’s worth something all by itself.